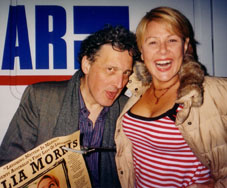 The delightful and fearless Julia Morris was back on the scooter
from the moment she arrived in town...
too bad we tried to go to Orly airport on a combination of taxi and RER...
we missed the flight and Milan an evening of un-bridled hilarity.
The laughs are not only on stage when Julia is in town and fun and games
were to be had between Belleville and the Buttes Montmartre.

and two different Parisian stages to kick start comedy again after the easter break.
Note that there are only two shows, one at the HdN and the other at La Java.

Lady Julia Morris is “breathless, glamorous, camp, snobby, self deprecating, gossipy,
fast-paced, surprisingly barbed yet subtle with a stream of energy and a delivery so relentless that you beg her to inhale, so rich with potential catchphrases you struggle to take them all in
It holds the audience, who can't afford to lose concentration for a split second
for fear of missing something great”.

Morris turned her back on a lucrative 10-year award winning comedy career in Australian television and headed for London in 2000. Since that move she has supported Richard Pryor, Robin Williams, Mark Curry, Rich Hall, and appeared on over 37 UK television shows...
including Paul Whitehouse's sitcom Happiness, Stephen Fry's Q.I. and Liquid News. 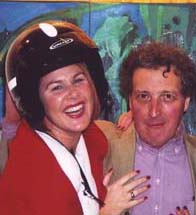 What the papers say
“One long, blue, naughty, unrelenting paragraph, with punchlines flipped
over the shoulder with a lift of a Jimmy Choo... if you’ve even the smallest funny bone it will spill you out into the night with a stubborn grin. I’m still laughing.”
The Scotsman

“Goes walkabout on her gravity-defying heels, the sheer momentum of the star’s personality
makes the hour and a half fly by far too fast.”
Evening Standard

“ A natural performer, her Gatling gun delivery spitting out universally
cracking lines with barely a pause or a flat moment.”
The Fest

“Wonderful, hilarious and unmissable living proof that audacity
and irreverent effervescence are life skills.”
The Scotsman

“The super-sexy diva of comedy is deeply, fundamentally FUNNY.”
Metro

“She packs more material into her show than should be physically possible.”
The List

“When Julia is in full verbal flow on a stage, it’s as though Joan Rivers, Germaine Greer and
Betty Boop are all living inside the same body. Phew, she’s a scorcher.”
The Herald

Laughing Matters in Paris
let the catiness out of the bag on
Sunday 28, Monday 29 & Tuesday 30 April 2002
Jackie