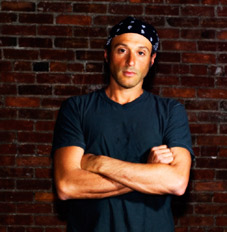 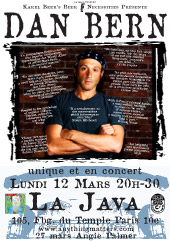 The return of the nervy troubadour
Dan Bern 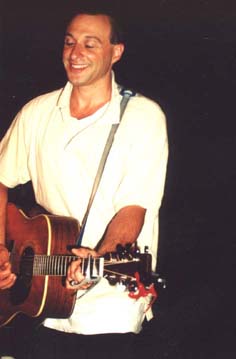 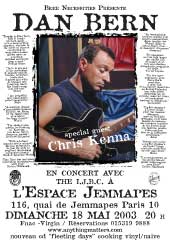 Sunday sees the return to Paris of Dan Bern, who like Mary Gauthier will have played in Paris three times in the past 18 months. Why so often ? Because we like them so much and they are both in the ranks of the finest contemporary songwriters around.
Dan's as sharp as a huntsman's knife and as a rule very, very funny.... with influences ranging from a couple of Bruce's (Lenny & Springsteen), Costello's (Lou & Elvis), Dylan's (Bob & Thomas), Woody's (Allen & Guthrie) plus a dose of the Charle's (Bukowsky & Ray) for good measure.... his postal adress is "Truth or Consequence" New Mexico and that just about sums up his songwriting too.... truthfull with a lasting after effect. He'll be appearing with his whole band this time making the concert even more appetising... opening we will have our very good friend Chris Kenna and his Moonray band too.

A Dan Bern show begs many questions. Is this the same guy who critics are overzealously proclaiming the newest folk "legend"? This man who plays the guitar like he just picked it up yesterday? This man who writes farcical songs about pretending to be a painter so he can con women into posing nude for him? Who affects an Okie accent that sounds like a cross between Woody Guthrie and Pee-Wee Herman? This is the next Bob Dylan?
Bern couples his songwriting skills with an ability to lock into an audience and make them hang on his every word. And, as with his approach to songwriting, he doesn't hesitate to think large. When fans at the show requested a song about Bruce Springsteen and "The Day They Found a Cure For AIDS," Bern decided to play "Cure for AIDS," as Bruce Springsteen, using three distinct impersonations to represent the man at different points in his career, and spontaneously revising the lyrics to mimic the Boss's New Jersey
dialect. The song culminated with Bern as a mid-Eighties Bruce bellowing out the bridge to the song (Bern claimed that was the only time Springsteen had musical bridges in his songs, necessitating that particular impersonation). Ultimately, Bern finished the song as himself -- one part bullshitter, two parts provocateur, singing bold and intelligent songs that folk hasn't seen since, well, you know....
excerpt from review in rolling stone 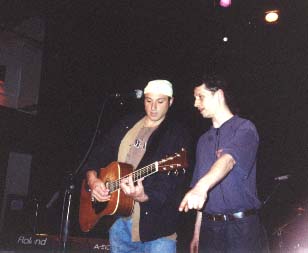 and the audience goes there !
Dan Bern
In Concert
with Brian Schey
Aux Étoiles 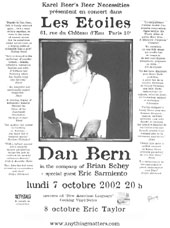 Dan Bern is steeped in the mythology of popular culture. He's literate, reflective, boisterous, fearless, witty and very funny. His current album "New American Language" has hardly left my turntable since it was sent to me. Produced by Dylan and Springsteen knob-wielder
Chuck Plotkin it is simply, in my humble opinion, better than anything that either Bob or Bruce have done in years. Unmissable !!!

"Thanks to Dan Bern, folk is finally relevant again… he's a song-writing machine, so close to the curve of current events that he sometimes comes across more as a singing political columnist than a poet"
Rolling Stone

"Bern is steeped in the mythology of popular culture… literate, reflective, boisterous,
fearless and witty. A brilliant late flowering talent has finally come into his own." Uncut

"The modern day answer to Ginsberg or Kerouac…. you know this is someone special."
Reviews Unlimited

"Dan Bern has had some interesting conversations with God!" Robyn Hitchcock 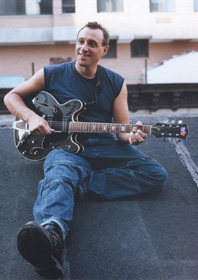 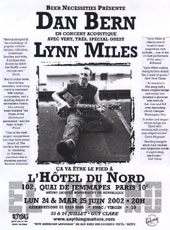 
Yet another amazing double bill brought about by the fact that I'd booked two separate artists for the same night. If only all mistakes were so richly rewarded.

Those in the know are raving about Dan Bern these days yet hardly anyone has heard of him. But then who had heard of Ryan Adams or Mary Gauthier before their first shows at the HdN. Dan Bern is steeped in the mythology of popular culture. He's literate, reflective, boist-erous, fear-less and witty. His current album "New American Language" has hardly left my turntable since it was sent to me. Produced by Dylan and Springsteen knob-wielder Chuck Plotkin it is simply, in my humble opinion, better than anything that either Bob or Bruce have done in years. Unmissable!!!