This stand-up’s got legs
Lee Mack is set to become one of our most famous exports.
So why is he still worrying, asks Stephen Armstrong

Just me, and a microphone. Nice and simple, just how I like it. And an audience of course. That's important. But that's it. That's all I need. Me, the microphone, and the audience... Oh yeah, and a theatre. For the audience to sit in. But apart from that nothing else. Because that's all I need for a top night of... Oh yeah and a P.A. system. But nothing else. No props. No gimmicks. Just me, the microphone, a theatre audience, a P.A. system and a gimmick. Oh yeah, actually there is a gimmick. I forgot, and a couple of props. But nothing else, just me, the microphone... Oh hang on I'm going to need a roadie for the P.A. system. But apart from that, it's simple. Just me, the microphone, the audience, the theatre, the P.A. system, the props, the... look, sorry, I've got to go, I've got loads of stuff to sort out...
A gifted comedy natural, Mack seems to get a kick from being silly. It's an attractive attitude, similar to Eric Morecambe's playfulness, that always wins through.
It's not a case of personality over substance, though, as even Mack's silliest puns and visual gags have clearly been extremely well thought-out. They're so polished they cannot fail to hit home, but delivered with a deft lightness of touch that catches you out.
He's just about to hit the telly big time, so see him now if you can. He's going to be a star. March 2001

You'll probably know Lee Mack from his work on ITV's "The Sketch Show" and Channel 4's stand-up show "Gas". Headlining the launch event of the 2003 York Comedy Festival he was faced with the challenge of following a strong line-up that had undoubtedly left the audience with high expectations for the top-of-the-bill act.
Fortunately Mack met the challenge head on and his down-to-earth, laid back, friendly manner endeared him to the audience instantly. This endearment early on was essential for his act to work as it relies more heavily than average on audience interaction.
This was both the best and worst thing about his set. While it was refreshing to see a different approach like this the venue, York grand opera house, lacked the intimate of a comedy club where this approach can really thrive, and the audience lacked the enthusiasm (and perhaps the alcohol levels) of a club crowd. Many of Mack's requests for "Any Questions?" were met with overlong pauses.
When someone plucked up the courage to take the bait however, Mack was razor sharp and his timing spot on and gave him the opportunities to slot in some great gags and routines from his collection.
His "I won't change my act, regardless" attitude, after discovering a 12 year old boy in the front row, was to be admired. The c**t's and f**k's continued to fly, as did a particularly near the knuckle (should that be near the elbow?) joke about fisting. From then on a little voice in the back of our minds kept saying "He can't say that in front of a 12 year old!", which added a great "edginess" to his performance.
An incomparable performer and comedian in every way, Lee is one of the most sought after and inventive live stand ups on the circuit, and winner of the Time Out Award for Best Live coemdy 2001. In Autumn 2002, he embarks on his eagerly anticipated first national tour, bringing his irresistible and reckless humour to fans across the country.
As well as his incredible success as a stand up, Lee is an accomplished sketch writer and performer, and took his sketch shows Lee Mack's Bits and Lee Mack's New Bits to the 2000 and 2001 Edinburgh Festivals, leading to a nomination for the coveted Perrier Award 2001.
In 2002 Lee starred in ITV1's British Comedy Award nominated The Sketch Show, which returns in Autumn 2002 for a second series. The first series won a coveted BAFTA for Best Comedy Programme, was nominated for a Golden Rose of Montreaux and a Banff Television Award, and led to Lee's nomination as Best Newcomer at the British Comedy Awards. The Sketch Show team also performed live at the Aspen Comedy Arts Festival 2002. 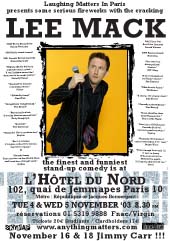