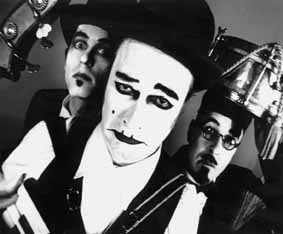 The Tiger Lillies are not like any band you've ever seen before. They are a London based Victorian/Brechtian accordian rooted trio who sport bowler hats and wear striped suits. Their song subject matter delves into murky fields such as bestiality, socially communicated diseases and excessive facial hair. Brought to our attention through their participation in the astonishing "Shockheaded Peter" show that was the hit of the Festival Automne at the Opera Comique here in Paris, they are fronted by singer Martyn Jacques who trained himself as an opera singer with a castrati style voice of heartbreaking beauty, whilst living alone above a strip joint in Soho for seven years. Accompanied by drummer Adrian Huge, whose appearance was described by David Byrne as James Joyce on drums, and double bass player Adrian Stout, Jacques plays accordion and sings savage and passionate songs about prostitutes, drug addicts and losers, his voice soaring and growling like a man possessed. Ken Campbell has described him as "the criminal castrati", and with his dickensian style of dress, long pigtail and bowler hat, his corrosive lyrics and his astonishing voice, all the while singing with his eyes closed, he makes an indelible impression. Jacques sings about life at the bottom of contemporary Britain with the voice of an angel.
The music is a startling mixture of opera, gypsy song and left bank Paris, but what really marks out this band from any other is the emotional charge and raw passion of the delivery. Because they are impossible to pigeonhole, the band has not yet had a wide commercial success, despite being picked up by David Byrne, with performances at the South Bank, as well as festivals and foreign tours, but this cannot last for much longer as their reputation is spreading very fast in the art culture underworld.
Like many of Britain's artists and musicians, The Tiger Lillies clain to live in poverty and obscurity whilst achieving international cult status.