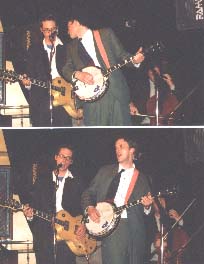 
Mark's set list
Tempted - Resolution 1 - The Quiet One - ? - The Way That She Really Is - Ciao My Shining Star
I Just Shot Myself in the Foot - In the Afternoon - Fathering - Wake Up Whispering - Alamo in Alabama
A Heart Disease Called Love - Hey Self Defeater - Hurry Please Hurry

Connecticut's much-touted Miracle Legion released a string of amazing, influential and critically acclaimed albums, only to end up signed to a big one sided record deal with a major record company who in a blink crushed them beneath corporates mush. Inactive for 2 years in the early '90s, their leader Mark Mulcahy spent the best part of the next five years re-learning the craft of entertaining audiences all on his lonesome. The experience proved instructive, because his solo album "Fathering" is imbued with infinitely more individuality than anything he did with his former band. Maybe that shouldn't be surprising, because Mulcahy not only plays all the instruments but overlays his own vocal harmonies and counterpoints in a set of emotionally involving, highly personal songs. The engaging simplicity of his arrangements and his sparing application of percussion make it feel as if he's sitting right there in front of you singing his sad little songs. Don't let the fact that Radiohead love him or that he's opened for artists as diverse as Mary Margret O'Hara, Vic Chestnutt, Jeff Buckley, Elliot Smith, Paula Cole, Oasis, and even Seal, confuse the issue: this man is very much a singer-songwriter to be filed alongside Tim Buckley, Neil Young or Jackson Browne.
www.mezzotint.com 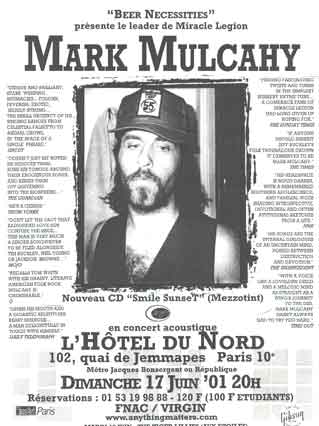