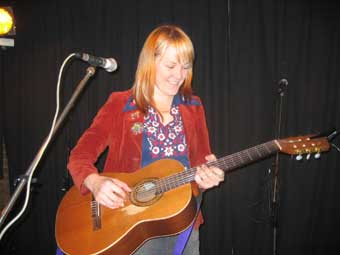 I've had had the pleasure of presenting Melanie in concert twice before
when she opened for Neil Casal at the Hotel du Nord and then Nick Harper in La Java.
As amusing as she is talented her songs sparkle with Beatlesque influences
and echos of '70s pop with a nod in the direction of the Bee Gees.
Back in Europe for an extensive tour she has found time to retreat into
the French countryside and record an EP in French the songs of which
she will no doubt introduce us to during her concert.
Also on stage for this "aussie aussi" night will be fellow
antipodians Melissa Cox (piano, violin, vocals), Alex Stuart (guitar) & Gerard McFadden (bass).
Stay tuned this will be a delightful night.
Karel 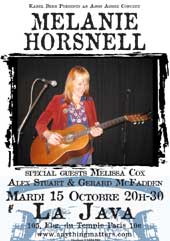