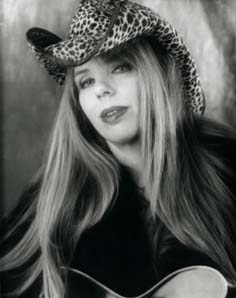 Crumbs an entire 5 piece band crammed into the corner, bass, snare drum, fiddle, two guitars and even a banjo at times.... !!!
Just like in her living room.

San Francisco's gifted singer, songwriter and multi-instrumentalist Jenny Kerr continues her upward rise out of the American roots music scene and into international prominence as a true craftswoman of deep conviction, a wry sense of humor and dedication to the form.

The San Francisco native's musical roots were laid down during the heyday of that city's sound explosion, and she got hooked on music through Muddy Waters, Dock Boggs and Bob Dylan. Derived from delta blues and country sources, her songs show a deep love of these early masters while moving into the realm of contemporary roots-rock pioneers like Taj Mahal and Ry Cooder. Always driven hard by her muse, Jenny has honed her skills on finger-style guitar, claw-hammer banjo, harmonica, piano and dobro to a sharp edge. The result - a trademark mix of country, blues, folk and rock centered around one of the most powerful new voices in the burgeoning roots-rock movement.

Last March 2002, her self-produced debut release Itch (JennyCo Records JCO-1061) sold by the score at her festival performances in the U.S. and during her first debut club and open-air tour of Europe. Then critics started comparing her to Delbert McClinton and Janis Joplin, tossing praise like, "powerful soulfulness in her special, blues-drenched, mesmerizing voice." (Martha Moore, Country Music Plus magazine, Ireland) and "flat-out great Americana, absolutely in the same league of such great tunesmiths as Tom Russell and Nanci Griffith." (Ed Ivey, Blues Revue Magazine, USA).

Next up for this talented artist, a fall tour of Eastern Europe followed by a West Coast recording break that will yield a new release by year's end. Meanwhile, please check out Jenny Kerr online and get in on some of the best new Americana songwriting available on any continent. Jenny's got the goods, and word's starting to spread.