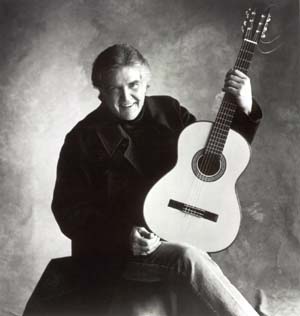 had some good photographs too but my camera was stolen
with the film in it.

Anyway here is the set list for the 2nd show

Born and raised in Texas, Clark and friends Townes Van Zandt and Jerry Jeff Walker all became fixtures of the Austin music scene in the '60s. Clark later lived in California before moving to Nashville in 1971. Achieving success as a songwriter with Johnny Cash's version of Texas 1947 and Walker's recordings of "L.A. Freeway" and "Desperados Waiting for a Train", Clark's reputation as a performer spread with the release of "Old No. 1", his 1975 debut album which is now regarded as a classic.
Clark's songs have been recorded by numerous artists, including Vince Gill and Steve Wariner. Ricky Skaggs took Clark's "Heartbroke" to #1 in 1982, with Clark and Rodney Crowell teaming up to write Crowell's 1988 chart-topping "She's Crazy for Leavin".

Creating compelling songs from personal topics is not the easiest thing to do. You've got to hold your breath and jump off the edge, he says. It's an emotionally dangerous place to be if you want to get really close to the bone. And while Clark isn't reluctant to record, his greatest gratification as an artist is when he performs those songs onstage. "That's what I love to do", he says. "I've got no reason to write unless I'm going to play for the folks. And I've got no reason to play for the folks unless I write. One feeds off the other. The whole premise is to play for the folks. As far as I'm concerned, that's where I do my best work."