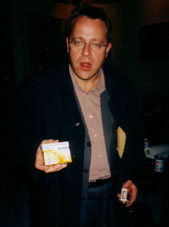 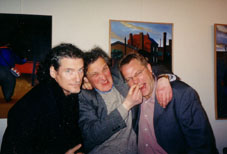 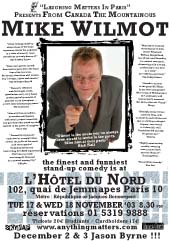 2003: Winner of the Barry award at the Melbourne comedy festival.
2002: Time Out award winner

"Wilmot is funny in the way that normally only root vegetables can be."
Simon Evans

" Leaves the audience in a state of hilarity that most comedians can only dream of."
The Sunday Times

"He sweats; he shambles; he swears. You'll cough, choke and chortle."
The Glasgow Herald

"At times raucous, offensive and downright crude... this was a most entertaining experience."
The Scotsman

"Like any fine comedian, he exudes intelligence and sweat in equal measures, Wilmot can give any other stand-up alive lessons in the power of laughter to free us from the shackles of embarrassment."
Time Out

"The 38 year-old Canadian is a natural raconteur, dispensing with a watch, 'preferring to use beer as a clock' ...
he's effortlessly funny."
The Independent

"Canada's answer to Bill Hicks....he's politically and anatomically incorrect. But damn if he ain't funny."
Metro

"I felt like my mind was being de-flowered by a cynical aging imp,
yet, disturbingly, this was a most entertaining experience.."
3 Weeks