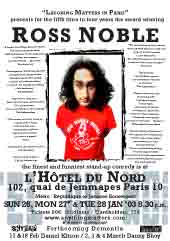 "Simply the most exciting stand-up at work today." Time Out

This tour follows the record-breaking premiere of the show at the Edinburgh festival (August '02) where it sold every ticket available and became the biggest selling show on the fringe. 'Sonic Waffle' then transferred to London for a huge West End season that firmly established Ross as the UK's biggest new comedy superstar.

'Undoubtedly one of the finest comedians to break through during the last decade, a natural comic with an instinctive gift for a vivid image. For once it is not hype to use the words 'comic genius'. Hot Tickets

Although first and foremost a live performer - Ross has recently made guest appearances on the BBC's 'Friday Night With Jonathan Ross' , 'Johnny Vaughan Tonight' and 'Have I Got News For You' and is a regular on BBC Radio 4's 'Just a Minute'

"Ross Noble proves himself to be an inspiration in free-form comedy, flying by the seat of his pants perhaps, but if you want to see a comic genius at work join Noble for the flight. It should be an exhilarating one." Evening Standard 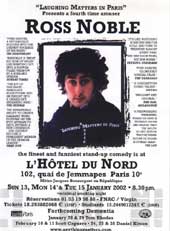 The bears, the pigs, the donkeys, le grande roue, the euro, the circus from Alsthom and the man who clears up the shit, we threw out a heckler - what a trio of nghts with one of the sharpest minds on the comedy circuit. Inspired genius. next year we'll provide the chinese tumblers, or at the least tea cups.

"It is like watching someone pan for gold and turn up treasure almost every time.
See him soon, then See him again." Evening Standard

"His remarkable ability to create dazzling word pictures on the spot appears to have entered a new dimension. A towering performance by a comedian who has already become a permanent member of the premier league." Time Out 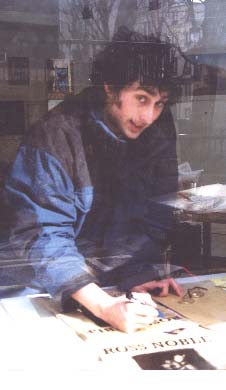 Ross had such a good time here in November with the Boston Coroner's 14 year old daughter and Sarah Jane's Teddy Bear that he insisted there be a couple Paris dates on his first major UK tour. Anyone who saw Ross a few weeks ago will know that there is no fear of hearing the same material again since he just makes it up as we go along with him. One of the sharpest, brightest and flight of fancy-est comedians you will ever see. Stunning and barely out of short pants. 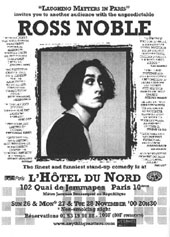 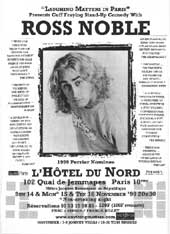 Ross and the late 20th century charmada in the Sound Gallery
on the monday Ross went to Disneyland Paris
and came back to find a girl in the front row
who devoured most of his second set
as well as a lot of wine.
Fun, though I'm not sure how much of a Noble cause it was. 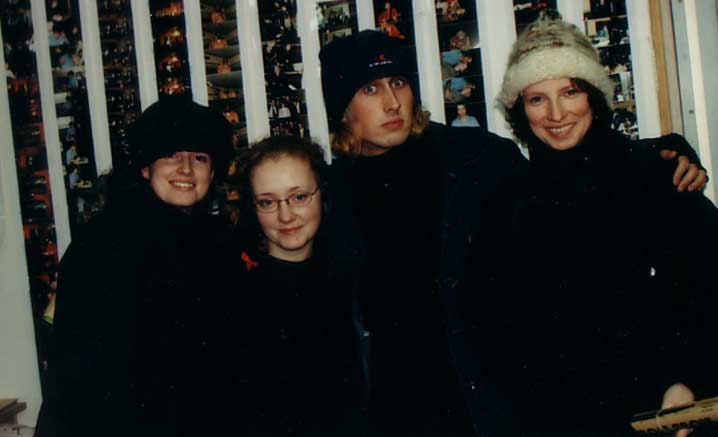 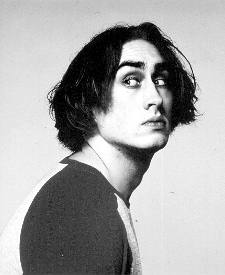 At just 25 years old, Geordie stand-up comedian Ross Noble has already established himself as one of the hottest, most sought after performers on the international circuit.
Ross is known for never taking the easy option, avoiding the lure of TV light entertainment, preferring instead to concentrate on performing live and relentlessly touring the world building a loyal following and an impressive range of awards and nominations.
Following hugely successful seasons in Edinburgh and Cape Town, Ross is about to begin a three week season at The Soho Theatre, London (Dec 2001) before embarking on a massive 45+ date tour of the UK and Ireland (Jan - Mar 2002).
In March 2002 Ross takes his show to festivals in Adelaide, Singapore, Melbourne and Auckland.
The first ever CD recording of the Ross Noble live experience 'The Official Bootlegs - Part One' is available now through the website www.rossnoble.co.uk

"Pushing the boundaries of comedy is the essence of what Noble does. Try relating any of his observations down the pub the next day and you're likely to get glassy stares where Noble commands tides of laughter." Metro

"Noble's remarkable ability to create dazzling word pictures on the spot appears to have entered a new dimension. This was a towering performance by a comedian who has already become a permanent member of the premier league." Time Out

"Noble is a freewheeling whirlwind, where his mind is working faster and wilder than the mouth so any notion that he should maybe think before he speaks is utterly alien." The List

"One of the fastest thinking, most inventive and totally in control performers, he slides from subject to subject so naturally that one can never be sure whether a particular riff is part of the script or an off-the-cuff meandering." The Stage

"His star is rising, brilliant and original." The Age, Melbourne
Comedy Awards

"Here is a comedian who has a gift for improvising hysterical, elaborate routines which most stand-ups could only dream of." Evening News, Edinburgh