“Charismatic, clever and self aware... Destined for great things”
The Guardian

“A cut above his humdrum peers.”
The Independent

“Clever and unafraid to show it; highly skilled with words ... The lad will go far”
Chortle

“whip smart ...with a barrage of intricately crafted jokes”
Time Out 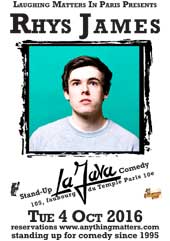