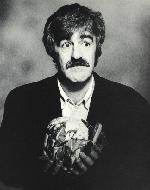 Put a cross in your diary and descend into the dark world of comedy over the Ascension break with the deadpan Dubliner who incarnated Father Stone in the sitcom "Father Ted". Redmond is the closest comedian to America's mercurial Steve Wright according to The Standard.

Expect his alter-ego "Eamon, Older Brother of Jesus" to be resurrected within the confines of the Hotel du Nord.