Born and raised in New York City, Paul attended the prestigious Bronx High School of Science !!! At 16, he began writing and performing stand-up before going to London to study drama with a capital D at RADA no less.... after which he went into REP in the UK and played Romeo... a unique achievement for a YANK... at least on the planks. His US TV appearances include the Letterman Show, the Tonite Show, Miami Vice and Dynasty... is there no stopping this talented lad ? No ! He has also opened for the likes of The Beach Boys, Paul Anka, Diana Ross and Sheana Easton... though there is no evidence that any of the forementioned opened for him. I could go on, but I won't because I'm busy and it's sunday and I shouldn't be working.
"smart, indignant perspectives...... an excellent example of socially conscious stand-up." Is what the Guardian said about his recent show.
The kid's cool I've been trying to book him for ages. Karel 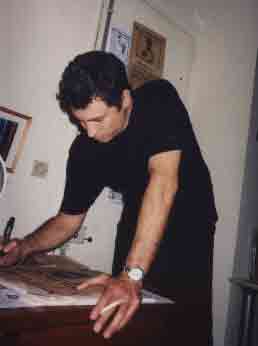