One night only
(or was it two?) 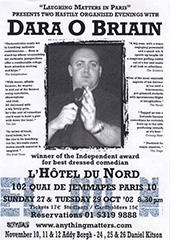 The other day Dara called me from Hong Kong to say that he was thinking of popping over to Paris for a few days, chatting, chilling out and apparel buying and was anything happening over the weekend ?
I didn't have a show and thought it a silly idea for him to come here and not perform
(even if his last shows were only back in June).
So after a few days reflection he called me from Shanghai to say that he'd be happy to do some shows,
but could he have the monday off ? Who was I to argue ? I'm not a slave-driver.
So we took full advantage of his mini vacation on sunday and tuesday to top up on a stock of laughter from one of Ireland's funniest, most likable and now best dressed comedians.

Ireland's loss is our gain

Dara's Paris debut two years ago was one of the biggest shows of 2000. He's big in every sense of the word and one of the nicest people you could ever spend Halloween with. A great pillion passenger and one of the funniest comedians you'll see on our tiny stage.
Rightfully one of the major names on the new Irish comedy front he appeared in the hit satirical t.v.show "Don't Feed the Gondolas" and has hosted the RTE show, "It's a Family Affair".

He has also worked as a newspaper columnist, with pieces appearing in almost all the national papers from the Sunday Times to the Irish Independent. His French isn't half bad and he speaks Gaelic with his father but English with his sister… 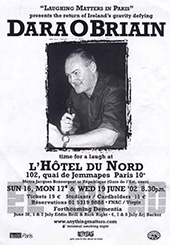 "Very very good. I refuse to believe that he is destined for anything other than major stardom. O'Briain is just too classy for words." - The Stage

"In terms of fresh, local talent, the one to be watching out for is Dara O'Briain. A dab hand at mordant contemporary commentary, O Briain's trademark motor-mouth material is at times quite inspired." - The Irish Times

I saw Dara in Edinburgh last year and was charmed by his bulky persona and endearing, chatty personality. In fact he was supposed to come to Paris last autumn but some other stand-ups got in his way. So in September he resorted to jumping the current queue by taking a break on the Ile St Louis.

Ostensibly to recover from the ordeals of his record breaking Fringe 2000 stint he ended up doing a spot of on camera wine tasting, an interview for Irish Eyes and an evening of riding pillion on my scooter whilst trying keep the wine inside his frame. Dara is a big bundle of fun and rightfully one of the major names on the new Irish comedy front.

His current taste of fame and fortune can in part be attributed to his appearances on the hit satirical telly show "Don't Feed the Gondolas" and his role as host on the RTE show, "It's a Family Affair" He's also appeared on numerous comedy TV shows in the UK including Channel 5's "Bring me the Head of Light Entertainment" and "The Stand-up Show".

He has also worked as a newspaper columnist, with pieces appearing in almost all the national papers from the Sunday Times to the Irish Independent. His French isn't half bad and he speaks Gaelic with his father but English with his sister…

More on the night. N.B. The 31st will be a Halloween Free Zone! 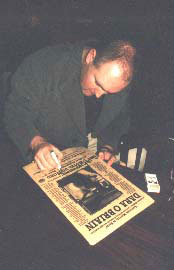 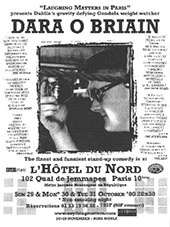