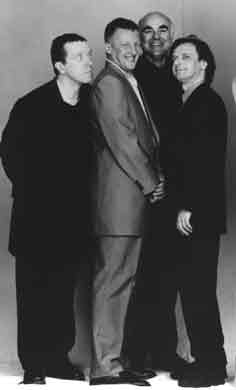 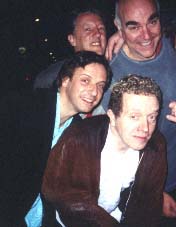 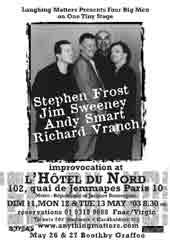 Phew what a crew !
I counted them all out and counted them back in... one by one I got them on the back of my scooter (OK not Andy) on a rainy tuesday night, ferrying them back to my flat for more wine and Harry Nilsson. It was noisy and exhausting but tremendous fun every night.

100 % improvisation ... no-one knows what's going on *
Audience participation obligatory... bring the kids
Decent hand-writing a definate asset*
No two show's ever the same... come back for more *
They make it up as they go along*
So much is off the cuff they have to wear short sleeved shirts *
The fasted brains in town firing from the hip*
Stars of "Whose Line Is It Anyway" " Just a Mintue" "Never Mind The Buzzcocks"
They even speak French and other foreign tongues*
So spontaneous they hardly knew who would be performing*

"That was a riot last night!
Surely one of the most hilarious nights we've witnessed at the brilliant Hotel du Nord.
If ever there was a finer example of why Laughing Matters in Paris MUST continue,
then I've yet to see it.
Thanks once again for bringing more brilliant entertainment to us and very many thanks to Stephen, Andy, Tony and Paul for a superb performance. What a team!
All power to you and Never get out of the boat!"
Philip and Katie Bradbury 20/5/2002