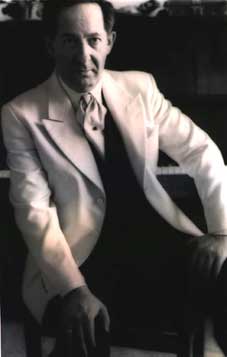 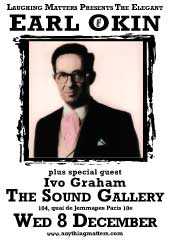 Earl (Spats) Okin is an anachronistic original who I first heard playing the piano in a vegetarian restaurant (Cyrano’s) in Hampstead circa 1972. At the time he was a piano playing songwriter and a very good one at that. Those were the days when I was with the band Bachdenkel (economic vegetarians who couldn’t afford to eat in Cyrano’s) who was trying to nail down a deal with a major record company. We (the band) fell under the Okin spell and then lost sight of him until the first time I went to the festival in 1995 by which time he’d turned himself into a turn of the century dandy-fied musical comedian who had been at the festival for 12 years. Currently he’s reached 500 shows there and entered the Guinness Book of Records. It’s taken a while but I’ve finally been able to give him the show he’s been after for 15 years. It should be quite a night as we also have Ivo Graham on the bill. Ivo who you might have seen chatting with a few weeks ago is young, barely out of his teens and whilst gathering considerable praise as a stand-up is still at University (Oxford) though he’s currently gap-yearing in Paris as a teacher in the 16th arrondissement which is a bit on the posh side but seeing as how he went to Eton I’m sure he manages rather well.