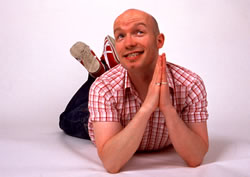 Camper than a big camp of campers pitching up their pink sparkly tents, but funny as hell."
[SCOTLAND ON SUNDAY]

"Riotously funny... his energy is boundless... He is that rare thing, a naturally funny comedian whose skewed expressions are enough to keep us happy. But he is also a terrific singer, with an effortless high falsetto that he employs to parody all the gay icons... his drunken Garland and underwater Streisand are spine-tinglingly accurate; tiny vocal masterpieces alone worth the ticket price."
[THE INDEPENDENT]

"Craig Hill live is a revelation. Cheery and charming, the audience warms to him instantly, but there's also a dark, couldn't-care-less bitchiness to his comedy...
Nothing and no-one is safe from Hill's sharp and deadly put-downs."
[THE SCOTSMAN]

"A high-camp, high-energy non-stop spate of gags, audience-directed invective (in the nicest possible way) and deadly-accurate take-offs of various chanteuses... Hill's voice and his impressions are so precise it's hard not to wonder if there wasn't a more serious musical career discarded in favour of comedy - except that keeping a straight face, or anything else for that matter, might be well-night impossible for such a lively and cheeky performer."
[THE SUNDAY AGE, AUSTRALIA)

"Camp Scot in a kilt with an enormous talent."
[THE TIMES]