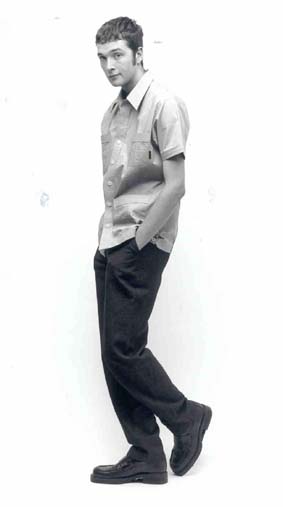 I first saw Chris a couple of years ago performing at the Plaisance in London along with several other comedians... even then when he'd just come down from Manchester it was obvious that this very youthful and good looking (yes girls he's cute but coming with his girlfriend) lad was destined for big things. Since then he's had major success in Edinburgh been nomintated for the best newcomer there and also the Barry Humphries Award (whatever that is). I'm really looking forward to these shows 'cause I am certain you are going to bring the best out in this young man and we'll all have a ball. Karel

Here's what the Observer had to say about Chris' 2004 show ...
" Thank God for Chris Addison, who consistently delivers what, to my mind, an Edinburgh show ought to be, and whose presence was much missed last year. Civilisation is as carefully structured as a play and as fluid and relaxed as the most accomplished stand-up. There aren't enough stars for Addison's show: he is erudite but not inaccessible or superior; confident without being arrogant, and the show is so well written and sharp that you will bore your friends for days afterwards quoting memorable lines from it. If you only have the time or money for one show this year, then it's a very long way to come for an hour, but make it this one."
Stephanie Merritt
Sunday August 8, 2004
The Observer