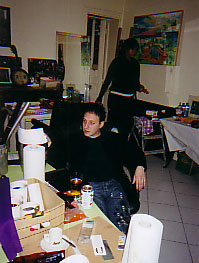 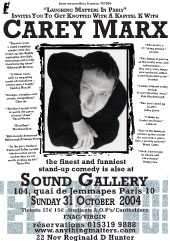 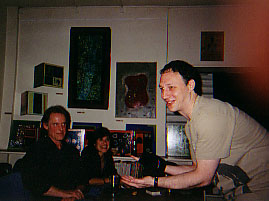 carey marx his cards in the sound gallery `

A former magician, Marx now concentrates on tricks of the verbal kind, using the conjurer's trick of misdirection to ensure the quirky punchlines come unexpectedly out of leftfield.
Offbeat, and sometimes off-colour, he finds comedy in the most unconventional of places, waging a one-man campaign, for example, against the evil and cunning threat posed by albinos.
Flirting with offensiveness - and with female punters - he crafts a sharp and original set full of surprises. He cleverly manages to be childish and knowing at the same time, neither pandering to the lowest denominator nor wearing his intelligence on its sleeve.
His performance is solid, too - as it should be. Marx has been performing in one form or another for getting on for two decades, giving him a laid-back air that he knows what he's doing that can come only from experience. Definitely a name to watch. Chortle.com 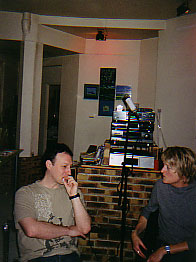 carey and kim richey in the sound gallery