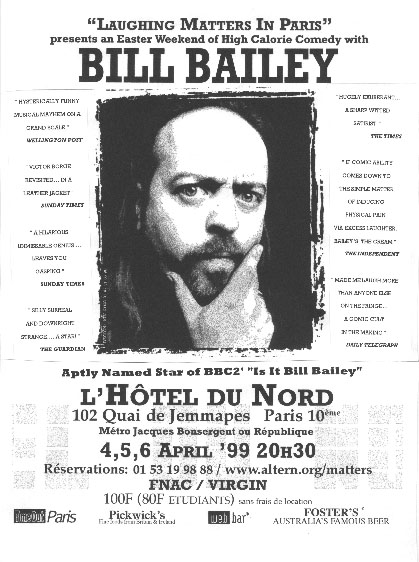 At long last Bill Bailey. Bill was originally scheduled when he was a mere snippet of a rising star back in 1995,
but terrorist attacks, power failures, strikes, and latterly his self induced fame have kept him away.
Cornered in a bar in Edinburgh last year we managed to cobble this long overdue date together.
One of the few stand-ups whose act featured French prior to performing in Paris, we can expect him to conjure up some uniquely pertinent nonsense during his stay. Perrier nominated for his sell out Edinburgh shows,
Bill has also had his own BBC2 series, "Is It Bill Bailey".

Described as "frequently hilarious and a damn good guitarist" by the Guardian, and "hugely funny...
highly talented" by Time Out, catch this man while he's in town.

What the audience said

Dear Karel, Just wanted to say bravo and many thanks for organising such a superb show. Bill was brill. It makes a nice change for me to wake up still chuckling from the night before and sex not being involved !!
Thanks one again and more power to your elbow!
See you at the next one!
Best regards,
SB

Hello Karel,
I just wanted to say thanks for kindly agreeing to our ticket exchange & for reserving us an excellent place dead centre & right in front ! The view couldn't have been better .Bill Bailey was marvellous & it's a long time since we've laughed so much & for so long.
How nice to have seen Anne Roumanoff there too . She was very good , & so brave to do her act in English.It'd be fun to have a few French stars along to try their hand at stand-up comedy in English at l'Hotel du Nord. It looks as if that may well happen in the future from time to time, judging by the interesting article you sent us from the Sunday Observer.
Thanks again for a great evening.
Bye for now until the next time.
Regards.
DL