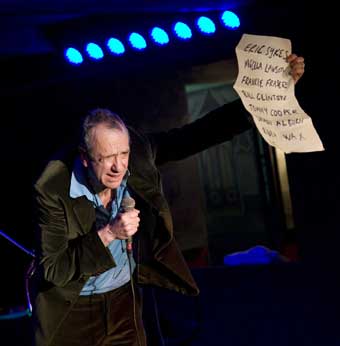 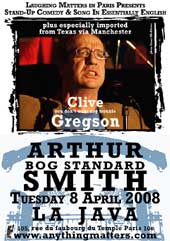 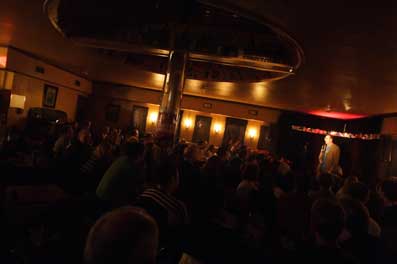 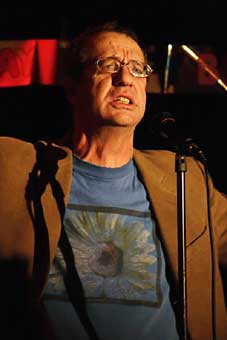 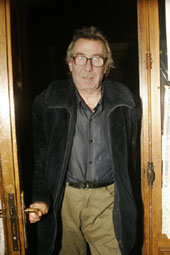 Arthur Smith is a compère beyond compare, playwright, panellist and performer of international stature. His plays include An Evening with Gary Lineker, My Summer with Des and The Bed Show. He has also worked as a road sweeper, dustman, warehouseman and teacher. He was born in Bermondsey, South London, in 1954. His father, was a PoW at Colditz, who went on to become a London policeman. Arthur attended a South London grammar school, became head boy and went on to the University of East Anglia where Malcolm Bradbury marked one of his plays B- and suggested he stick to comedy. He is a stalwart of the Edinburgh Fringe Festival and his latest offering was Arthur Smith Sings Leonard Cohen which transferred to London's West End.

Arthur presents Radio 4's weekly programme about travel and much else besides, Excess Baggage, and previously presented a Radio 4 travel documentary series, Sentimental Journey. From Argentina to Cuba, via several bars in New York, Arthur has travelled the world, amassed an unrivalled collection of shoe buffers, airline socks and anecdotes, speaks fluent French irrespective of country, can, and will, quote Dante at length. He has featured on many radio shows including a six-minute talk about Plato. He remains a regular guest on Loose Ends.

“A very funny man. He is one of the few that made the transition from silent to talkies.”
Lee Mack

“He invented comedy, before him was nothing but gloom and he speaks perfect French.”
Greg Proops

“Like fine wine, Paris ages well, fortunately this doesn’t hold true for Arthur Smith
for without his bitter skewed look at everything he would not be Arthur Smith and that
would find us all lacking.”
Dave Fulton

“When I think of Arthur Smith my mind wanders.
I picture beautiful young women in see-through clothing strolling the countryside....
many of them wanting me sexually.... some two at a time.
Hey wait a second.... who were we talking about?”
Eddie Brill 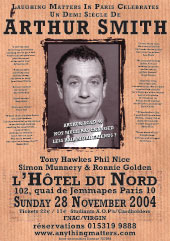