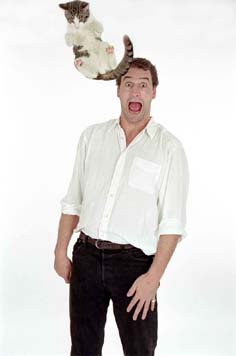 The cat is optional.
Quarantine regulations prevent Boothby from bringing his own pussy
but feel free to bring your own for him to chuck around.

"The most talented man to be named ater a Lincolnshire is an amiable cove and a neat guitarist. This is inspired stand-up." The Times

"Anyone who's seen him live will tell you the same story, whether. he's entertaining a clique of highbrows in a one-man show at the Edinburgh Festival, or silencing a bunch of baying drunks at a late night show at London's Comedy Store, this guitar playing, playwriting stand-up is one of the funniest comics in the land." The Guardian

"One of the most mercurial performers around. His maverick comic talents could make him the new Spike Milligan." Evening Standard

"an enigma wrapped in a riddle. may not yet carry the same kudos as Ross Noble or Johnny Vegas but, at his best, Boothby can leave them stumbling on the starting block. He plucks comedy from confusion and brilliance from thin air." The Scotsman

"Has the audience in stitches and eating out of the palm of his hand. Mixing fantastic one-line gags with hilarious monologues and hugely imaginative improvisational material, Graffoe seems to have a comedic Midas touch. Catch him whilst you can!" Three Weeks

"With sharp wit and an expressive performance he improvises and ad-libs his way through a brilliant stand-up routine… actually made me cry with laughter." Rip It Up Magazine

"He's big, he's friendly and he makes you laugh your pants off. He's so confident and at ease with his audience that frankly, if he wasn't dripping in sweat at the end of his act you'd want to give him a big old hug. Material is a mix of absurdity, effacement, audience interaction and a few straight gags, but what really make his act sublime are his comic songs, making the evening clearly memorable. Bloody funny. Highly recommended". BBC1

"Should have his own TV show. He writes great gags, improvises as well as anyone, plays the guitar and sings songs that are both beautiful and funny. And he can handle drunken hecklers at the same time as he makes your mum want to knit him a scarf." Arthur Smith