Laughing Matters
brought back the howard that knows no end* 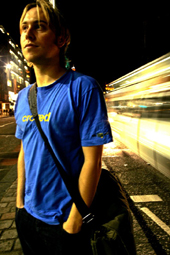 click on the microphone to hear an extract from this sensational show featuring
diplomats, aspiring stand-ups, international school teachers and students galore plus an offer of strepsils
on one of the best nights of comedy in milano so far

"Russell Howard is an effusive ball of energy, lights up the stage with his childlike enthusiasm.
His joie de vivre proves infectious, and he’s willing to lark about,
which gives his act a welcome air of spontaneity.”
Chortle

"An adorable talent…quick witted, flippant and very funny.
He takes his own brilliant pathetic-ness and makes entertainment.
A natural comic; not just in the sense that he radiates wit
but in that the personality behind the mic is his.
Three Weeks

"Incredibly Funny…. the beauty of Howard’s material is that it blends the observational with the ludicrous”
The Independent

"The brightest new talent... the future of British comedy”
The Metro

"This man is a natural born master of live comedy. See him live while you can.”
Hairline

*back in october 2004 Russell came to town on a double bill
with John Oliver and simply blew everyone away...
the audience wouldn't let him get off the stage
and Russell had no intention of curbing his or their enthusiasm...
it got pretty rowdy by the time John Oliver confronted a very mixed audience
made up of 50% comedy clients and 50% local jazz fans...

Russell's off the cuff free-form ramblings bring to mind
Ross Noble and 5 a side team-mate Daniel Kitson
making him one of the new names to watch very carefully. KjB