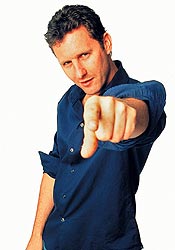 
Laughing Matters in Milano is thoroughly delighted that the first Australian male stand-up to come to town should be Adam Hills is one of the most talented and widely respected comedians on the circuit, and in Adam's case it's a global circuit. He'll be flying in specially from Los Angeles for his Milanese debut.
His unique style of thoughtful, uplifting comedy and rampant spontaneity have won him rave reviews. "so effortlessly brilliant you wonder why some comedians even get out of bed."says The Guardian or "so life affirming that everyone leaves with a spring in their step" according to London's Evening Standard.
With a shelf of awards and a legion of fans worldwide he has accumulated thousands of air miles through appearance at all the major festivals in Montreal, Adelaide, Melbourne, Kilkenny and Edinburgh, where in 2004 he sold an incredible 10,000 tickets.
Although he now lives in London where he has become the "darling" of the UK comedy he still finds time to make regular appearances in Australia where he hosts the TV music quiz show "Spicks and Specks".
Coming across as one of those people that charms just about everyone he meets Adam is instantly likeable, genuinely friendly and with no comedy shows planned in december, the ideal way to bring 2005's hilarity to a close.