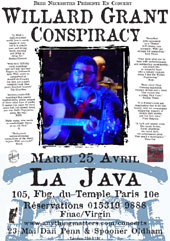 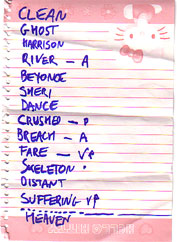 new CD "There But For The Grace Of God (Loose Records)

They have a lot in common but they could hardly be more different.
A truly compelling double bill !

Tough call here.
When Josh & WGC are out on the European roads promoting new and excellent albums and both independently looking for a Paris date on the same night, what does a promoter do ?
Persaude them to team up into a unique and very attractive double bill that's what.
It turns out that Josh & Robert Fisher (WGC) go back a long way and are friends on and off the road so both bands like the idea of their parisien paths crossing in Café de la Danse.
Don't arrive late because the venue has a strict 10-30 pm curfew
and there is going to be a lot of music and musicians to get through.