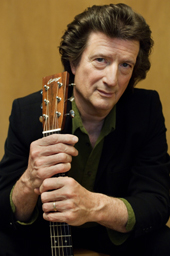 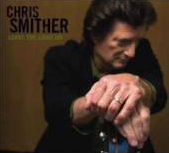 Chris Smither is truly an American original. With a career that spans four decades, Chris Smither was one of a handful of musicians on the scene during the blues renaissance of the mid '60s. That revival, brought on by renewed interest in folk music around the U.S. strongly influenced the early work of, among others, Bob Dylan and Bonnie Rait. With his new album Leave The Light On, Chris Smither has created a work that keeps the spirit of these legends alive while taking their blues-rooted music in breathtaking new directions with his smart lyrics and distinctive musical grooves. As an added treat, Smither invited Grammy Award-winning mulit- instrumentalist, Tim O'Brien, along with rising American roots stars Ollabelle, to lend their talents on several tracks.

ASSOCIATED PRESS
A product of the musical melting pot, and one of the absolute best singer-songwriters in the world.
WIRED
A megawatt solo performer.
BLUES REVUE
This peerless singer-songwriter is also one of modern blues' finest fingerpickers.
ROLLINGSTONE.COM
one of the most riveting live shows you're ever likely to see.
His growling vocals, badass finger picking and uniformly brilliant songs are here in spades.
REVOLUTIONS
His voice has astonishing power even when barely louder than a growled whisper and a guitar so full of the blues.
NEW YORK TIMES
has taken the blues in a direction entirely his own: stoic existential ruminations sung in a pained,
weathered moan and set to quietly virtuosic guitar.
MONTREAL GAZETTE
With his Southern-drawl singing voice, tapping foot in constant motion and fingers pulling fluid blues patterns from his acoustic guitar he can convert almost any audience he sits down in front of.
VILLAGE VOICE
grand voice, stomping foot, blues-drenched guitar, and abiding interest in the problem of evil
SAN FRANCISCO CHRONICLE:
he's matured into one of roots music's most passionate, soulful songsmiths and interpreters.
CHICAGO TRIBUNE:
Sitting all evening in a wooden chair, blue acoustic guitar cradled in his lap, feet miked to amplify him stamping out the beat, Smither coupled a firm grasp of nuance with understated, focused energy. Smither's quiet intensity made itself felt most of all in his dazzling guitar picking.
BOSTON GLOBE:
(among the finest acoustic guitarists anywhere in American music
his songs, while banked in the blues, are as modern as tomorrow's newspaper. 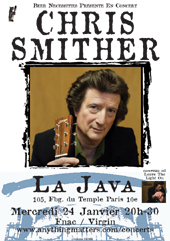 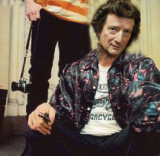 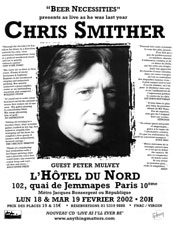 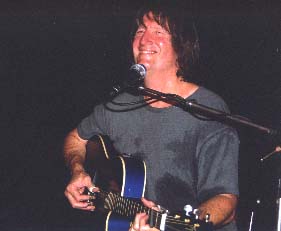 This was Chris' big show on a steaming July evening when we ran out of seats and beer.
With bar staff from the Baron Rouge, Chez Angele, Stolly's, Les Vignes de Lancry and the Zero Zero on hand
we were in the company of folks used to staying stood-up for long stretches but when the beer ran out of gas
even they couldn't keep the pumps pumping !!! What a way to end a season of sensational concerts

Chris first started playing music as a kid growing up in New Orleans. The son of a Tulane University professor, he was taught the rudiments of instrumentation on his mother's ukulele. "Uncle Howard showed me two chords, but when I learned a third I knew you could pretty much rule the world."
After teenage years spent woodshedding, then winning a battle of the bands at the Saenger Theatre on Canal Street, Chris headed to Boston at the urging of Eric von Schmidt. It was the mid-'60s and acoustic music was flourishing."I'd loved acoustic music - specifically the blues - ever since I first heard Lightnin' Hopkins' Blues In The Bottle album. I couldn't believe the sound Hopkins got. At first I thought it was two guys playing guitar. My style - to a degree - came out of trying to imitate that sound I heard." In Boston, he forged lifelong friendships with Bonnie Raitt (who has made Smither's "Love Me Like A Man" a signature song of hers, and refers to Chris as "my Eric Clapton"), Eric von Schmidt, Jim Rooney and a host of others who were writing songs by day and performing them at one of the many clubs around town at night. 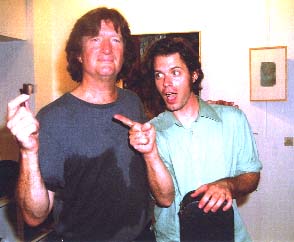 Smither's first albums were released on Poppy Records, home of Townes Van Zandt and an impressive stable of roots-based artists. By the time Smither recorded his third album, Honeysuckle Dog, with Lowell George and Dr. John helping out, United Artists had absorbed Poppy and dropped much of their roster. To this day the record has never been released. Smither's next record would not be made until 1985, when the spare It Ain't Easy marked his return to the studio.
By the early '90s, Chris Smither was on a full-time schedule of making his music happen. His return to steady nationwide touring and regular releases of consistently brilliant albums quickly cemented Smither's reputation as one of the finest acoustic musicians in the country. In 1993 he received the NAIRD award for the year's Best Folk Recording. It was with the release of Up On The Lowdown in 1995 that Smither crossed over to the roots label HighTone Records. It also marked his first of three albums to be recorded with producer Stephen Bruton at The Hit Shack in Austin. The album rode the crest of the newly formed Americana alternative country radio format wave and far outsold Smither's previous recordings.
In early 1997 Chris released Small Revelations which earned further notice in print, high positions on the Americana and AAA radio charts, and concert dates with B.B. King, Bonnie Raitt, Nanci Griffith, and the hugely successful "Monsters of Folk" tour with Ramblin' Jack Elliott, Dave Alvin, and Tom Russell. Emmylou Harris recorded his song "Slow Surprise" for the soundtrack of The Horse Whisperer and added another gold record to Chris's wall. His recording of "Hold On" was used in the indie feature film Love From Ground Zero.
Drive You Home Again, Chris's 1999 release, added a few new continents to his touring schedule. In addition to his thorough blanketing of the US and UK, he toured New Zealand and Japan, returned to the venerable Jazz & Heritage Festival in New Orleans, and joined John Prine and Joan Baez on tour. 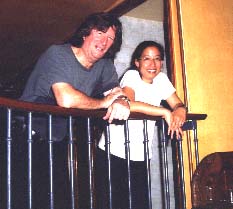 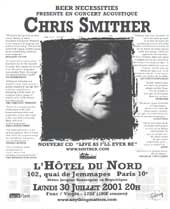 
Music Matters in Paris presented for one night only
Chris Smither 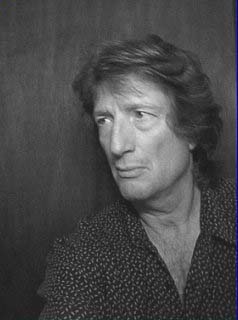 In Concert at the Hôtel du Nord 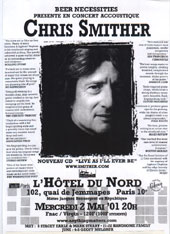