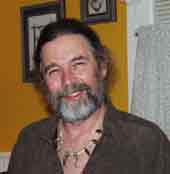 I started out playing for folks at a coffeehouse in San Antonio, Texas called
the Gatehouse. I had grown up listening to rock and roll but my dad wouldn't
buy me an electric guitar, so I became a skinny-kid-folkie hanging out behind
the joint between sets, nursing a bottle of Boone's Farm Strawberry Hill wine
and waiting for the Revolution to begin. It never did.
One night in '70 or '71, a trio of what appeared to my young eyes to be
Gypsies stumbled through the door &#8212; all buckskin and beads and leather guitar bags and tales to tell of their travels in the Great Out Yonder.
As it turns out, they weren't foreigners at all but local heroes returned to
the fold. Rex Foster, Don Harding, and Merrily Weeber had come out of one of
my favorite local rock bands, Rachel's Children, gone acoustic, traveled to
France (!) and recorded a record (!!!). They were the first people I ever
knew that had ever been anywhere or recorded anything and I was spellbound.
[This was my first solo album, "Roads Of Tomorrow" &#8212; r.f.]
At 15 years old, I sometimes struggled for credibility in the local folk
scene. Don and Rex never dissed me like that. They treated me as an
apprentice artist, always glad to see me, always supportive. I never forgot
it. Today, when I'm approached by a young songwriter and I'm tired and just
want to get on the bus, I remember that night and my good fortune to find
teachers along this long weird highway, and I try to smile like Rex did back
then and say "What you got there, man?"