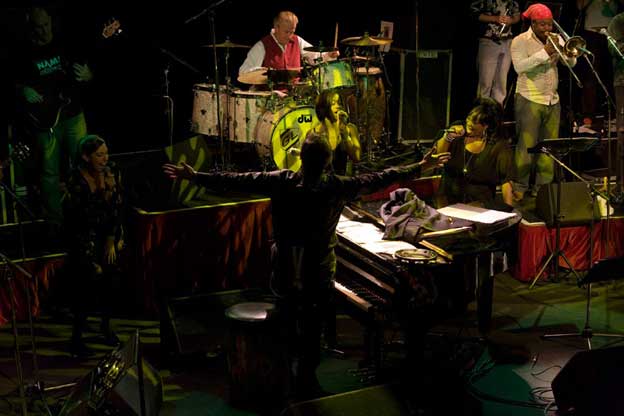 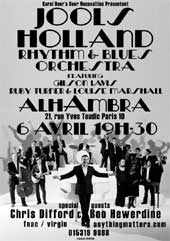 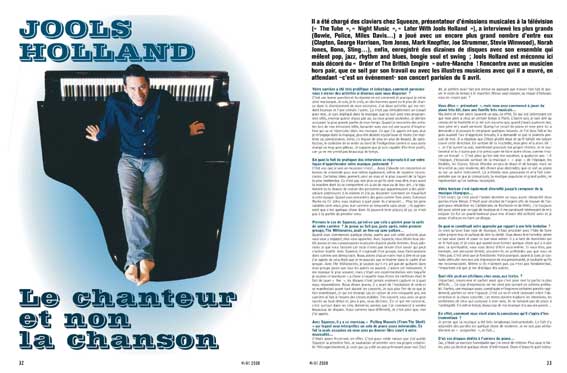 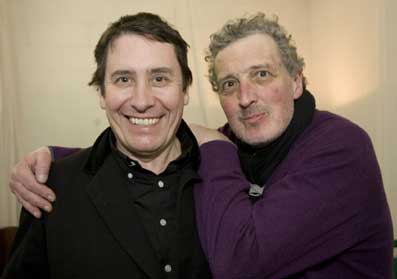 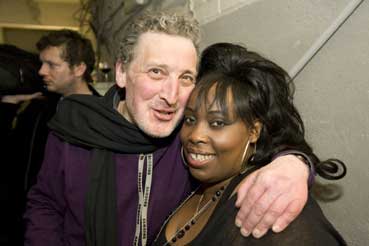 Thanks, Karel, that was a really great show! Perry

Amazing concert last night!!!! Thank you for bringing them to Paris!!   Jennie L

Hi Karel, Thanks for organising the great night last night. Without doubt one of the best nights we’ve had in Paris.
It’s not often you get to stand a couple of metres away from the Jools Holland. H

Thank you for organising this concert. It was great. Could you please keep me informed of other events. Keith H

Enjoyed the concert IMMENSELY. you did a great job. what a hoot. the music was fab, the 'mini' bar was a simple & effective idea for the venue, and the lay-out w/the seating & the dancefloor was perfect. got home much sweatier than i left but that's the sign of a good night had imho :)
all my tickets were taken so there was no prob there. thanks for being open to negociation though lol
see you soon hopefully. pls keep me posted for next concerts. A x

Karel, that was a fantastic evening. Congratulations! You must have put a lot of hard work in!
Thanks so much, we all had a brilliant night, Kirstey

Hi, I absolutely loved the gig tonight; all the different singers and styles. I found the tune that Difford + Boo did with the band to be
especially poignant. And with certain band members as big as they are, Jools and the singers have no worries; bigger than bodyguards they are!
Thanks for the show, John M

The concert was absolutely wonderful Karel. Thanks for making it happen. Ian P

Hi Karl, I thought it was a great concert last night!  I almost helped out behind the bar to make things go more smoothly, Joyce G

Hi Karel Once again, a brilliant evening with Jools.  He never disappoints.  And how cool to be able to actually dance - well, bop around anyway!
Thank you!  And here's to the next one! Meg

It was an amazing concert Karel and well worth missing out on my beers. Well done everyone! Babs

Karel, overall a great night and I was also impressed with the acoustics. Admittedly the bar was a shambles and I hope that I don't have to queue for 30 minutes to get a beer tonight ;-) Thanks for organising everything, Jonathan.

Hi Karel, Great night at the Alhambra - well done you for all the organising and hard work you had to put in to get this show to happen!!
Just put a Movie up onto Youtube of the 'Final Encore' which I think perfectly sums up the night, i.e. Chilled out singing + Boogie Woogie Rocking
- a perfect combination!! Andrew E

thanx  a lot Karel the  band was really good, Chris and Boo fantastic
everytime i come to  your concert, it's a masterplan !!(Richard Thompson or Dan Penn)
wonderful night vincent segal

Good evening Karel,
Many many thanks for such a fantastic evening. It was brilliant from the time we arrived early to buy an extra ticket, to the time your guys kicked us out the door at the end of the evening. Best concert ever, honestly!
The makeshift bar just added to the atmosphere and was not a problem. We felt that we were in the show rather than distant excluded observers as big events leave you feeling, and you, your team, and your guests made us really feel welcome

If you can secure Jools and his Rhythm and Blues Orchestra as the regular house band, we'll be there every Sunday. And the added cherry on the cake of seeing Chris Difford (& Boo), having never seen Squeeze but still listening to their music after all these years. My daughters have never seen such a show, so I figure I've done my bit in passing the word down to the next generation.
I hope that the concert was a great success for you in all ways, and I that we'll become regulars to your shows in future. If you've managed to contribute to getting France to recognising the exceptional talents of Mr Holland et al, then we'll be proud to say that we were there at the beginning (or second time around at least).
Thanks once again,
Chris, Kay, Jess, Lou and Benj....

Hi Karel, Congratulations on a wonderful show. What a fantastic band!
Sorry we didn’t get to chat – you seemed under pressure (understandingly)! oh well it all turned out well in the end. Great job!
Look after yourself, try and get some rest soon. Love Juliette S

Dear Karel, we had a spectacular night of boogying! Can't wait till the next time. Claire.

Hi Karel The concert was a blast!  Thanks for getting Jools & Co over here! Miranda B

It was a beautiful show. Best - Ian & Sophie

Karel,Again, thanks so much for organising all these fantastic concerts.
It was the second time I’d seen Jools. I also took my husband to see him this time, for the first time.
He too was completely blown-out – just as I was 2 years ago and 2 nights ago!!All the best,Nicky

Karel, many thanks for having organised such a super night. All the best, Annette H 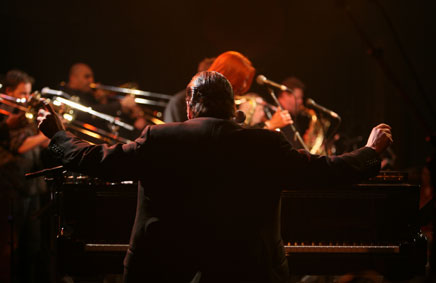 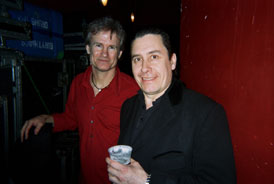 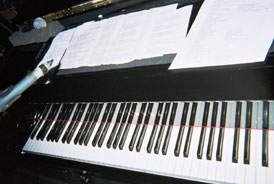 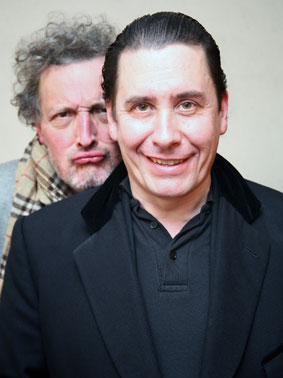 Hi Karel, just a small note to say a HUGE thank you for Thursday night aboard the boogie express.
We where blown away by the whole event. The music, the venue, everything was perfect.
The Morecambe crew will be back soon to Paris for some top quality stand up.
If Jools is in the mood to do it all again, you can count on our support.
Paul and Ceris.

Karel,
I got tickets via a friend at work to go and see Jools Holland last Thursday at Le Trabendo
and it was a truly wonderful experience... a really magic evening.
Rebecca Brooker-Jones

Hi Karel
What a fantastis gig!!! It may have been his first time to play in  Paris, but lets hope it won't be his last.
Whoever you get over to play next: They'll have a hard act to follow !!
Liz Sheehan

Hey, thank you too Karel, it was a lot of fun!
Big Beer Hug & see you soon!
Gabriela Arnon

Thanks again! Really was a blast. The only other reason I am up that late anymore is a nappy change for my boy...more fun drinking French vino with you and gloating over our good times.
cheers and merci,
John Lester

Karel,
Not being British I knew nothing about Jools before the concert, but you were so enthousiastic in your emails about him I thought I simply must go.  What a great surprise!!!  He and his band were FANTASTIC!  Had I known I would have insisted that all my FRENCH jazz and musician friends come.  When is he coming again????  BEG him to come back!!!  I danced my "ass" off.
What great fun!
Joyce Good

Thank YOU Karel!  Had a fantastic night.
Lisa x

Dear Karel
Thanks for organising a fandabydosey (really brilliant) evening.  The venue was just right - great atmosphere and just the right size not to big and visibility great from all angles.  We didn't stop dancing !!! How could you not.  Next job for you is to get Jools back  - how about it ? See you soon
Sally Le Corre

Thanks for organising Jools.  Great show. Enjoyed it. See you next time!
Corinne Winter-Rousset

Karel
that was some show last night ! thanks for pulling that off regards
rob

That was a terrific gig. Thanks for all your work & for making me discover him.
Chris Holmes

Hi Karel
A rather belated thank you to YOU for having pulled it off!! What about making it an annual affair?
Best gig I've been to for years!
Kind regards
Meg Filipidis

Yes Karel, It was a cracking concert.. It was great to see a smiling Jools and I"ve liked Sam Brown from her big hit years ago ..
Keep up the good work
Kind regards
Donna Ellender

Hi Karel,
Thanks for organising last night's gig. It was absolutley fantastic and not something anyone will forget in a hurry. Hope we can get them back some time.
Cheers and have a great weekend.
Colin

My SPUD and I went to see the Jules Holland Rhythm and Blues Orchestra last night in Brussels. They'd been in
Paris the night before, thanks to the same promoter who brought RT there in January of this year and last
September. I expected it to be mildly entertaining, but it was EXCEEDINGLY entertaining - a great evening
out, followed by a really good dinner that cost next to nothing.>
Sadly, the only Jools Holland concerts left on this tour are Amsterdam this evening and the Hague
tomorrow, so unless you've already planned to go this is probably too late. It's something of an anachronism
to tour with a big band these days: 18 musicians (5 saxes, 3 trumpets, 4 trombones, guitar, bass and drms,
plus JH on keyboards and 2 female singers). I don't know what the economics of this are, but it's rare
enough to be remarkable. If you get a chance to see this mixture of blues, boogie-woogie, soul, swing and
reggae, don't miss it. You won't be able to keep still for a moment.
Richard 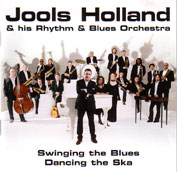 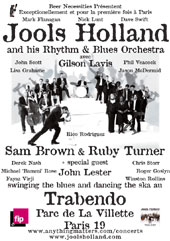