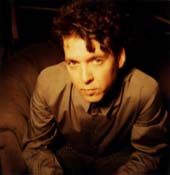 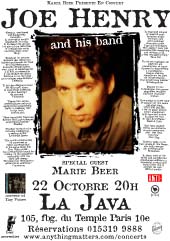 "Joe Henry was quite a discovery for me, despite owning a copy of Solomon Burke's "Don't Give Up On Me" comeback album, which he produced, I was pretty much in the dark as to Mr. Henry's musical status. Things changed fast once I'd received a copy of his current album, "Tiny Voices" which were it vinyl would be worn through to the other side by now. It's been resonating through the Sound Gallery almost non-stop for the past month and it still takes me by surprise each time I hear it. A true, curious, gem of a recording that creeps under your skin like "Pet Sounds" did all those years ago. Now Joe's credentials are pretty interesting, he's Anti-label mates include, Tom Waits, Jools Holland and Eddie Izzard... and whilst making the comedy connection he wrote a song called "Richard Pryor Addresses A Tearful Nation" on which Ornette Coleman plays saxophone.... now that's no laughing matter. He's worked with producers such as T. Bone Burnett and Daniel Lanois, musicians as diverse as Mick Taylor, Tim Drummond, Anton Fier, Chuck Leavell, David Bromberg, Jim Keltner, Don Cherry, Marc Ribot, Brad Mehldau, Me'shell Ndegeocello and Van Dyke Parks. For this unique Paris concert he will be backed by drums, bass and keyboards.
Miss this one at your peril !" Karel

"Tiny Voices is a record in which a sharp view of the world and confidential experiences collide in a wonderful musical & sonic fabric that is entirely his own." Elvis Costello

"Dreamy, weathered and deceptively romantic.... A thoroughly soulful experience, not only in its deep blue groove but also in the narratives of melancholic souls haunting every song." Mojo

"A fractured cabaret of spectral craft, haunting sons, stubborn soul and burnished chromium guile. It fogs and smoulders with elegant jazzy roll sounding like everything and nothing at all... a very wonderful thing." Time Out