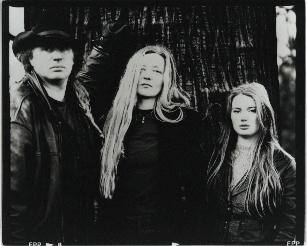 It's 30 years since Boyd produced the first Fairport Convention and became recognised as a guru of contemporary British folk acts through his work with the likes of Nick Drake and Sandy Denny. Boyd is now managing director of the well-respected world music label Hannibal, which has not been noted for its contemporary English language acts. Therefore its new signing, "Hank Dogs", has created great excitement in folk circles, "One night I heard them on Festival Radio and thought they were fantastic," says Boyd, "I couldn't work out how a band from South London could write songs like that. Then I saw them at The Troubadour and that was it. I've resisted signing anyone for a long time, But I love this band so much I had to do it". "Hank Dogs" are a trio built around the voice and songwriting of frontwoman Piano, who is flanked by guitarist Andv and his daughter Lily on percussion and backing vocals. As revealed on their album Bareback the band's ethereal sound and disquieting material fits no obvious musical parameters