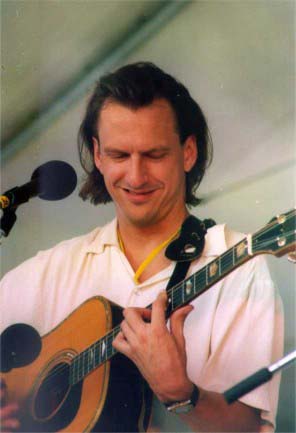 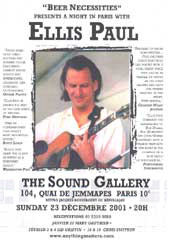 Karel's eyes view
Let's face it. I had never heard of Ellis Paul. It was Hervé Oudet (largely responsible for setting up recent concerts with David Olney, Eric Taylor and Jack Williams) who called me up to say that Eliis and his partner would be in Paris over the christmas holidays and I really ought to grasp the opportunity to present him in concert. Sure Hervé. "All I need on the eve of my departure for London is to be involved in promoting a concert with an American singer songwriter I'd no direct ties with." (Who later would land in Paris without his guitar, suitcase, CD's etc.) Then I started to listen to his album "A Carnival of Voices". It hardly left my turntable. I played it linear and random and it grew on me like a pearl in an oyster. So I went to see James next door in the Hotel du Nord and said we have to do this concert, albeit at the last minute. Heck we moved a crowd in 35 hours for Bob Neuwirth, imagine what we can do for Ellis in 10 days! We got Ellis some guitars but in the end it wasn't to be in the Hotel du Nord after all, we did it next door in the Sound Gallery. Great show.

Set list
Give In Give Up / New Orleans / The Speed of Trees
Sweet Mistakes / The World ain?t Slowing Down
Words / All Things being the Same / Maria's Beautiful Mess
Rattle my Cage / Let it Be / Conversation with a Ghost
Eighteen / Did Galileo Pray / Roll Away Bed
Mrs Jones / Paris in a Day / Last Call
Beautiful World / Transluscant Soul