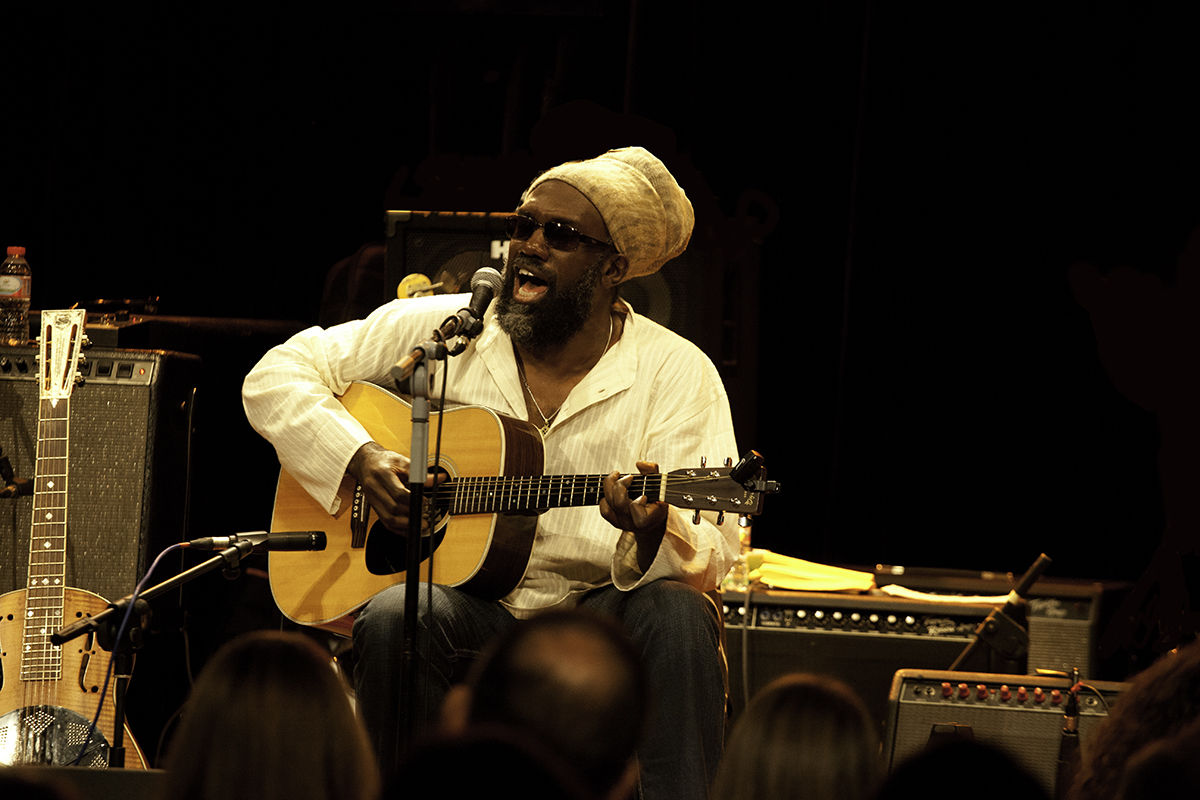 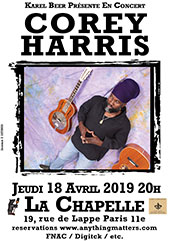 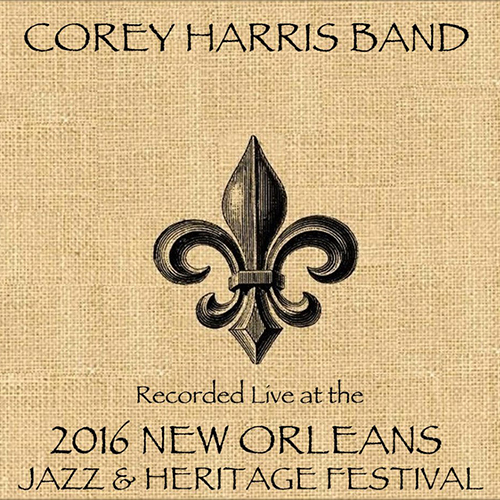 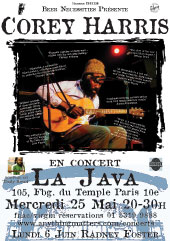 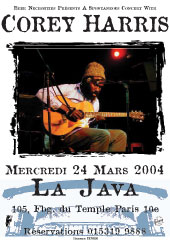 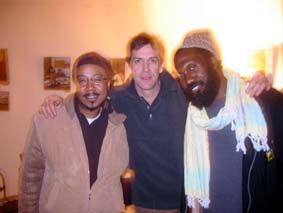 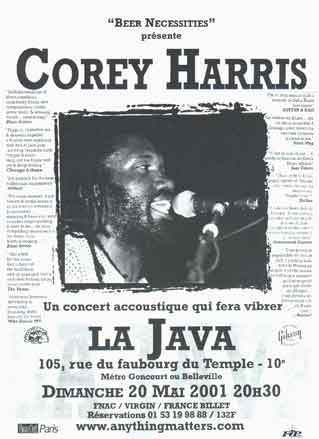 and then there was
Alain on harmonica, Little Victor on another marmonica,
+ members of the Wedding Band got involved in the community jam

Hailed as one of the saviours of the acoustic blues tradition. "The class of the new acoustic blues singers," shouted the Village Voice.
"A throwback to a lost era," raved Blues Revue.
Indeed, Harris, who in just six short years has gone from busking on the streets of New Orleans to sharing stages with B.B. King, Buddy Guy, Natalie Merchant, The Dave Matthews Band and Billy Bragg, has only one constant in his music, and that is evolution.
Besides blues, Harris loves all styles of music and rejects the notion that he is the living incarnation of the old blues masters.
"I like to live in the here and now and look forward," he maintains. Harris uses his acoustic blues as a blasting-off point, making up-to-date, foot-stompingly original music that seemingly crosses all boundaries. 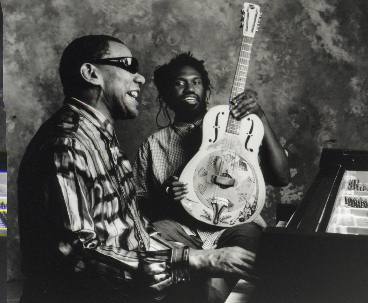 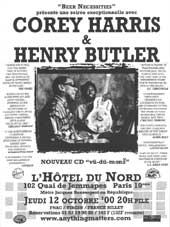 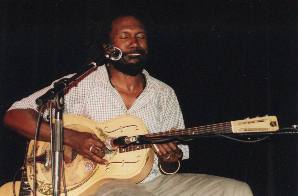 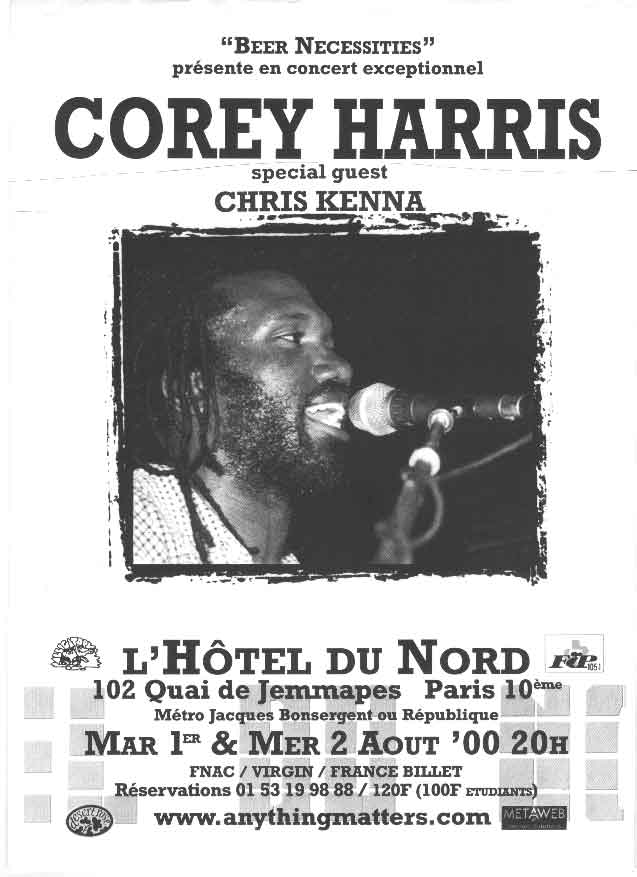 When people first hear 28-year-old acoustic guitarist/vocalist COREY HARRIS, they often think they are listening to one of the old blues masters. A native of Denver, Colorado, Harris fell in love with music at an early age, and made his own music with a toy guitar he received at age three. He learned to sing and play by ear, When his mother turned him on to Lightnin' Hopkins at age 12 (the same year he got his first real guitar), Corey found his true musical calling.

After attending Bates College in Maine, Harris, along with his newly acquired National steel guitar, moved to Cameroon in West Africa in 1991. While there, Harris' love for acoustic blues continued to grow, as did his understanding of the importance of the indigenous juju music ("the place where blues began," according to Harris).

After returning to the United States, Harris moved to the rural Louisiana town of Napoleonville and began teaching French and English, all the while continuing to play his blues and refine his craft moonlighting as a street musician in nearby New Orleans. He quickly devoted his life to music full time.

In the past 2 years, Corey has played with B.B. King, Buddy Guy, Koko Taylor, and Billy Bragg, just to name a few. Currently living in Charlottesville, Virginia, he continues to draw upon his myriad of influences to deliver one of the most unique, yet timeless sounds around. 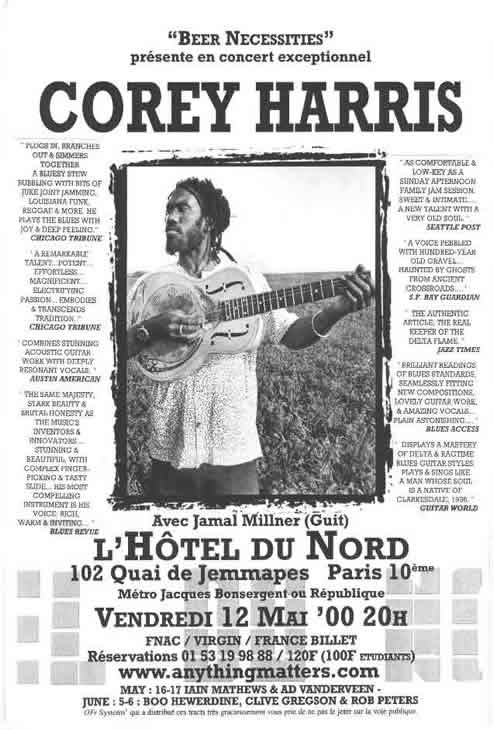 Clearly Corey can't get enough of playing at the Hotel du Nord, he's been here every year since 1999
and we can't get enough of this tremendous singer-songwriter hailed as one of the saviors
of the acoustic blues tradition.
His visionary 1997album, Fish Ain't Bitin', solidified his reputation as a ground breaking acoustic bluesman.
"The class of the new acoustic blues singers," shouted the Village Voice.
"A throwback to a lost era," raved Blues Revue.
But that's not the way Harris sees it. "There's blues in me," says Harris, "but I'm not a bluesman. I just live to be a songwriter, I don't limit myself to playing just one type of thing. I try to put variety into what I do."
In town to play a sold out Olympia on the 10th with Tracy Chapman, for those who want to know more about him on a face to face level get down the "The Bottleneck" restaurant where he'll be settling in for a
Question & answer session on thursday 10th at 8-30 pm. it's at 31 bvd Malesherbes Paris 8.

"Blues on the Fourth of July" 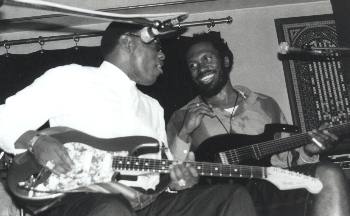 Nouveau CD
"Greens From The Garden"

There will minor flag waving and major "Blues on the 4th of July"
when Corey Harris returns accompanied by Jamal Millner & Harry Dennis.
Their show last July was one of the summer of 98's most memorable non-sporting events.
They are really looking forward to coming back to the Hôtel du Nord
and will stopping off en-route to the Montreux Festival. 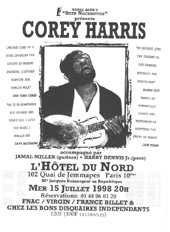